The Sandcastle Girls by Chris Bohjalian 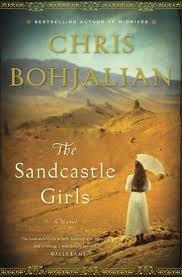 I sent a preview email to book members with these thoughts:
If you haven't been able to access the book, please consider coming anyway, since we will mostly likely talk about general knowledge of genocides (the theme of Sandcastle Girls is Armenian genocide) or other works by Bohjalian. This story is also about trauma, allies, survivors, the role of religion, the role of aid workers, and how folks keep their culture alive.

SYNOPSIS from The Sandcastle Girls
A spellbinding tale travels between Aleppo, Syria, in 1915 and Bronxville, New York, in 2012.

Elizabeth Endicott arrives in Syria, with her diploma from Mount Holyoke College, a crash course in nursing, and only the most basic grasp of the Armenian language. The First World War is spreading across Europe, and she has volunteered on behalf of the Boston-based Friends of Armenia to deliver food and medical aid to refugees of the Armenian genocide. There, Elizabeth becomes friendly with Armen, a young Armenian engineer who has already lost his wife and infant daughter. When Armen leaves Aleppo to join the British Army in Egypt, he begins to write Elizabeth letters, and comes to realize that he has fallen in love with the wealthy, young American woman who is so different from the wife he lost.

Flash forward to the present, where we meet Laura Petrosian, a novelist living in suburban New York. Although her grandparents’ ornate Pelham home was affectionately nicknamed the “Ottoman Annex,” Laura has never really given her Armenian heritage much thought. But when an old friend calls, claiming to have seen a newspaper photo of Laura’s grandmother promoting an exhibit at a Boston museum, Laura embarks on a journey back through her family’s history that reveals love, loss --- and a wrenching secret that has been buried for generations.

From the book group questions packet, we considered these questions from  ReadingGroupGuides.com

•  At the end of chapter 19, does Elizabeth make the right decision?
•  How would you have reacted in the wake of a similar tragedy?

One of the things we talked about was the strength that Elizabeth (and all women) had inside of her. The many ways women were killed reminded us of gladiator games and the sport that (apparently) is inherent in them.  The tragedy is atrocious and the desire for one generation to want to shield the next generation is understandable.  However, it does impact future generations in not having details about their history, identity, and ancestors.  With the knowledge, comes an appreciation of how family’s fought to survive, so that their descendants might have a better life.

•  Though The Sandcastle Girls is a novel, author Chris Bohjalian (and fictional narrator Laura Petrosian) based their storytelling on meticulous research. What can a novel reveal about history that a memoir or history book cannot?
•  Before reading The Sandcastle Girls, what did you know about the Armenian genocide?
•  How does this history broaden your understanding of current events in the regions surrounding Armenia?
•  What if the story were told from the perspective of a man, instead of a woman?

We thought that the female perspective was important.  Women and children are often major victims in war, from torture to death.  History tells the stories of generals, soldiers, and battles.  It often leaves out the impact of war on families, lovers (unless romanticized in a story about a man), and infrastructure.  While we knew of the Armenian genocide, we did not know details of the systematic slaughter of humans.

•  What do the characters of Dr. Akcam, Helmut, and Orhan tell us about the process of resistance?
•  What separates them from the others, Who become capable of horrific, dehumanizing acts?
•  What relationships exist between "couples" in this story?

We thought Bohjalian did a great job at showing the range of human experience through the characters in this book.  Even “good people” do “bad things.”  It is impossible to always make the “best” or “right” decision, just look at parenting!  The characters were realistic in that they had a range of feelings – wanting to follow orders, wanting to fight in a “just” war, and also not realizing what they had “signed up for” and feeling conflicted about the dehumanizing acts they became involved in.  In times of war, it is impossible to know who to trust, and yet, there are people that are trying to help.  An ally might have power (to save photographs, to give a job) or an ally might simply be another person who becomes a friend or even family when everyone else is gone.  Being one of two is very different than being the only one.

ABOUT CULTURE/HISTORY – We didn’t get to discuss these questions

•  When Laura describes the music of her 1960s youth, her steamy relationship with Berk, her belly-dancing aunt, and other cultural memories, what is she saying about the American experience of immigration and assimilation?
•  Culturally, what did her grandfather sacrifice in order to gain security and prosperity in America?
•  How do Laura’s discoveries enrich her sense of self?
•  Discuss your own heritage and its impact on your identity. How much do you know about your parents’ and grandparents’ upbringing?
•  What immigration stories are part of your own family’s collective memory?

CAUTION: These summaries may contain "spoilers"

WHAT HAVE WE ALREADY READ?

We formed in 2004. If you are interested in the quick rundown of the books we've already discussed, the themes we used, and the "starter questions," CLICK HERE.

We began this book group in September, 2004 with a few parameters and goals. Our parameters began with a sense that, for the moment, the group would be all female. Folks could come and go, but we needed to have a "core" of at least four who came more regularly. As much as possible the core group needed to be diverse in their cultural background (ethnicity, religion, etc.). Ideally, the “core” needed to read A LOT on their own (not just for book group). They also needed to be willing to have high level intellectual conversations which included concepts of power and privilege and the ability to talk about oppression (personal experience, courses on the topic, familiarity with the language, etc.). We agreed as a group that people didn't need to have finished a book to be part of the discussion, but someone in the group needed to have read it. Logistically, the meetings would be a once a month potluck dinner. When we invited “new folks,” we needed to let them know our “parameters.”

Our goals included developing “themes” and then selecting four to six books at a time to read over the months the theme would stretch. The books could come from sources such as our own previous reading, current bestseller lists, or recommendations from others.

Our nickname "The Big Brain Book Group" evolved after one member shared this story - She belonged to two book groups and was heading out to ours one night when her partner asked, "Is it the big brain or the small brain group?" The answer was "big brain" and the name stuck.